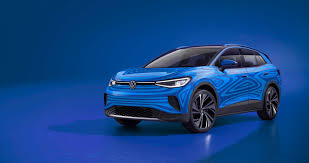 Lest you think Volkswagen is merely talking a big game around its future as an electric-car-focused brand, let VW America's COO and industry legend Johan de Nysschen lay it out.

"The [2021 VW ID.4 electric car] is the most important new Volkswagen debut since the Beetle," he said casually during a private debut event for the new electric-car crossover vehicle. "Where the Beetle brought mobility to the masses, the ID.4 brings e-mobility to the millions, not the millionaires." Quite the catchy slogan, but catchy is what VW hopes for the 2021 ID.4, intentionally positioning its first full-scale production EV in the U.S., in the country's hottest-selling segment.

Instead of launching the new ID sub-brand here with a cluster of quirky, bubble-bodied hatchbacks that would have likely undersold and come to be considered by consumers as nothing more than stylistic oddities, VW's first electric-car feint on our shores is into the compact crossover segment. This is a space occupied by A-List best-seller mega-stars like the Toyota RAV4, Honda CR-V, and Chevrolet Equinox.

Of course, while buyers in this segment are probably some of the least likely to take purchasing risks, VW did its due diligence and double-checked its homework—according to VW, 30 percent of compact-crossover buyers are ready to make the switch to EVs. Not a huge number, but considering there are more than 4 million new compact crossovers sold during normal economic conditions, the 2021 VW ID.4 electric car might be poised to capture a significant chunk of those sales. The ID.4 is set to start landing in customers' hands in early 2021, with order reservations open now

So, with a $55-billion investment in ongoing EV development, the sleek 2021 VW ID.4 lands as the first reasonably priced all-electric compact crossover, standing a full segment-size larger than the Hyundai Kona EV and that car's sibling, the Kia Niro EV. VW wants and needs to make sure this appeals not just to the EV-curious, but to the greater buying populace as a whole.

Range anxiety is usually the No. 1 reason people cite as causing them to hesitate to make the jump, but VW says the average reported distance a compact-crossover driver will travel daily is 59 miles, with only 88 percent of those people reporting they driving more than 100 miles in a usual day. "For some reason, some buyers have it in their heads that they drive across the country once a week," de Nysschen chuckled. "If they do take one of those mythical roadtrips, they can stop and charge it."

At launch, the 2021 VW ID.4 electric car has an 82-kWh battery sending juice to a single rear-mounted motor, returning 201 horsepower and 228 lb-ft of torque, but more importantly 250 miles of range on the EPA cycle. The range is not ironclad quite yet, but VW tells us to expect it to be just above or just below that 250-mile sweet spot. Find yourself running low, and the ID.4 drinks from up to a 125-kW fast charger, shooting the ID.4 from 5- to 80-percent charge in 38 minutes.

If you aren't near a fast charger, expect the 11 kW onboard charger to charge the battery enough to travel 33 miles, in about one hour, and complete a full battery charge in around 7.5 hours at a home or public Level 2 charger. VW will sometime next year launch a dual-motor AWD ID.4 with 302 combined horsepower, and a slightly lower range. Have a small boat or RV trailer to tow? VW claims the ID.4 leads the class with a 2,700-pound towing capacity. Regardless of spec, VW is happy to announce all ID.4s come with three years of free fast-charging service through Electrify America.

It certainly looks the part of VW's EV renaissance. The 2021 ID.4 is very much what we hoped and imagined this electric car would look like—a less aggressive productionized translation of 2017's I.D. Crozz concept. It's an effortlessly stylish design, with strong brand identity balanced with clear-cut conservatism as to not alienate those who are more interested in fitting in than standing out. In other words, compact-crossover buyers. Through the use of clever aerodynamics, lip spoilers, and underbody packaging, the ID.4 slips through the wind with a 0.28 drag coefficient.

Inside, it's a cool, future-forward environment with smart packaging, especially in the driver's quadrant. A 5.3-inch digital dash frames the view ahead of the electric car's driver, while buyers have the choice of either a 10- or 12-inch infotainment display that harbors controls for the aforementioned radio, navigation, media, and climate control. Beneath the screen, touch controls handle additional climate functions, and you also find a handful of essential menu-navigation buttons. Drive functions are operated via a nifty, cluster-mounted shift array that looks straight out of "Blade Runner." Like other electric cars, the 2021 VW ID.4 supports seamless turn-on; that is, once you're seated and ready to go, just put it into drive and set-off without any need for hitting a start/stop button.

Early adopters of the ID.4 are more likely to be tech-gurus, and VW hopes to court them with standard features like wireless charging, adaptive interior lighting, gesture controls, four USB-C ports, wireless app connect, and VW's full range of driver-assistance systems packaged as IQ.Drive. Spec it right, and the ID.4 incorporates a full panoramic glass roof and power tailgate with easy-open gesture function.

As VW put it, this has to be an excellent compact-crossover vehicle first, and an electric car second; the fact it's all electric should just be icing on the cake. As such, there is essentially identical passenger space in the ID.4 compared to the Toyota RAV4 and Honda CR-V, right down to leg and shoulder room. Out back, 30.3-cubic-feet of cargo space with a bi-level loading floor provides a smidge less than the competition, but more than enough for regular use and occasional fold-down second-row duties that gives a combined 64.2 cubic feet.

Of course, the biggest factor in all of this is price, as it's no use going against the industry's best if you can't match them financially. The 2021 VW ID.4 electric car starts at $39,995, before the applicable EV tax credit or state-level incentive, equipped with the mid-level "Pro" trim. With an average segment transaction price of around $33,000, VW thinks this is right on the money, while also promising a lower-cost entry-level model is on its way in the near future that's predicted to land around $35,000. For $43,995, an ID.4 1st Edition combines the available Statement package (vegan leatherette, panoramic roof, power tailgate, premium lighting) and the Gradient package (20-inch wheels, bi-color package with black roof) with 1st Edition-specific touches that include white accents inside and out, small 1st Edition badging, contrast mirror caps, and some seriously adorable Play/Pause graphics on the throttle and brake pedals. แทงบอลออนไลน์

So, finally, VW's electrified future in America is here, and it's every bit as cohesive as we hoped it would be. If the 2021 VW ID.4 sounds like an electric car you'd like to snap-up for yourself, VW will hold you a car if you pay a $100 reservation fee, ahead of those deliveries beginning early next year.