The outgoing M4 was plenty powerful, but this takes it to a whole new level.

BMW recently took the wraps off of the new BMW M4, and, well, it didn't go over so well with the internet. There's hardly any way around the fact that its grilleface is a tough one to love, so let's cast our minds back to the original BMW M4 and its smaller kidney grilles. The BMW M4 originally came out in 2015—when it stopped being known as the M3 coupe—and it was a spicy car to drive, so naturally Manhart has decided to give it the one thing it didn't need: Even more power.

The Manhart MH4 GTR is actually based on the already rather rare BMW M4 DTM Champion Edition. Just 200 of these special editions were built to celebrate BMW's successful return to the German Touring Car Championship. In BMW's first season with the M4, Marco Wittmann won the driver's title, and the commemorative M4 followed with DTM-inspired looks, some extra aero bits, and a fresh BMW M inspired livery.

Manhart takes things just a little bit further. Thanks to an ECU remap, a new intercooler, aluminum charge pipes, and a stainless steel exhaust, the  MH4 GTR now makes (a frankly ridiculous) 698 horsepower and 722 lb-ft of torque. For reference, the M4 DTM  Champion Edition came out with "just" 500 horsepower—the same amount as the M4 GTS thanks to their shared water injection system.

You might think that, to cope with the extra power, Manhart has maybe added some fancy dampers or maybe some extra bracing around the car. But no. Instead, to tame all that grunt they added custom wheels that are just 0.4 inches wider than the wheels the car originally came on. There's also a new front splitter and a bigger rear wing, but you're probably going to need a few more enhancements than that to tame that monstrous engine. Hey, at least it's still better looking than the new M4.

It's like many of the old-school Land Cruiser and LX builds you've seen, only new and expensive. 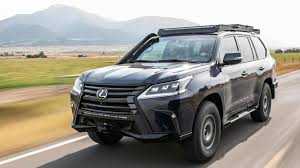 Luxurious, expensive, rare...a brand-new Lexus LX 570 might not seem, at first glance, to be a great candidate for an overlanding build. But Land Cruiser aficionados are well aware that this big luxury SUV shares its bones with its Toyota sibling—and as upmarket as both of them are, the underpinnings are formidable, as are their capabilities. Older Land Cruisers and depreciated Lexus LXs are popular starting points for full-size overlanding rigs. Lexus is fueling the imagination with this J201, a custom overland build done in collaboration with Expedition Overland.

Normally the LX 570 doesn't boast the kind of power the J201 produces. The 5.7-liter V-8 is naturally aspirated in normal models, good for 383 horsepower and 403 lb-ft of torque. It's plenty, even at part throttle, even considering the LX's heft. And yet, more is always welcome. The J201 features a supercharger, cranking up the output to 550 ponies and 550 lb-ft. The supercharger is an aftermarket unit sourced from Magnuson, which can be added to the LX (or Tundra, Sequoia, or Land Cruiser with the same basic 5.7-liter V-8). Icon suspension provides up to 4.8 inches of front and 4.1 inches of rear lift.

There's a long list of goodies besides that, including more performance-oriented bits and plenty of overlanding gear—too much to list, as the saying goes, so we'll call out the highlights. ARB front and rear air lockers are a great upgrade to provide useful traction to the General Grabber X3 tires in sticky situations. CBI off-road bumpers front and rear are complemented by CBI skid plates and rock sliders. A Warn Zeon 10-S winch is on board, as well as two Rigid Industries light bars and a TJM Airtec snorkel. For gear storage, there's a Prinsu rack up top with storage for MAXTRAX traction boards. Inside a Goose Gear drawer system and Zero Halliburton aluminum travel cases help organize other gear.

The J201 is a concept, although given the heavy reliance on existing aftermarket parts there's no reason you couldn't build one pretty much exactly like this—if you're willing to spend. Many of the components are relatively top-of-the-line, fitting the character of the Lexus. But why is it called the J201, anyways? It's a nod to the enthusiasts who refer to vehicles like this by their internal model code. The LX 570 is the "URJ201"—the UR refers to the V-8 (designated 3UR-FE), and the J201 represents the model code for the J200-series Land Cruisers and LXs. It's dorky fanservice and that's great.

The special Lexus J201 will also run in this year's Rebelle Rally, a 1,200-mile all-female rally, with past champs Rachelle Croft and Taylor Pawney behind the wheel—quite a debut for this ultra-lux off-road machine.