Fuel efficiency is the name of the Taos’s game. 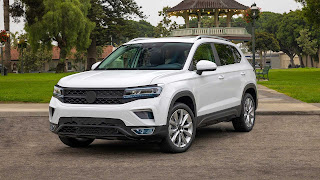 Slated to arrive at dealership showrooms in the summer of 2021, Volkswagen's newest compact SUV, the 2022 Volkswagen Taos, enters VW's SUV and crossover lineup sandwiched between the Tiguan and the recently revealed ID.4. It will be built at the Puebla, Mexico plant, and is ready to go head-to-head with its adversaries in the fiercely competitive SUV kingdom. We recently visited the newly expanded Volkswagen Group Test Center in Oxnard, California, to take a quick test drive of a prototype version of the Volkswagen Taos.

The Volkswagen Taos is powered by a new 1.5-liter turbocharged four-cylinder engine generating 158 horsepower and 184 pound-feet of torque. A tad bit more powerful than the 1.4-liter engine used in the VW Jetta, this new engine promises to deliver suitable power and excellent fuel economy.

Featuring a higher compression ratio of up to 11.5:1, the new 1.5-liter engine uses a high-pressure injection system, map-controlled cooling module, air plasma sprayed (APS) cylinder coating, and a Variable Turbine Geometry (VTG) turbocharger. The results of this relatively exotic technology are good low-speed torque, a shorter time to warm up the engine, on-demand engine cooling, and faster heating of the vehicle interior, all in the name of fuel efficiency. Volkswagen's new 1.5-liter engine is the first volume production engine to employ VTG in North America.

The Volkswagen Taos is available with two drivetrains to suit your driving style and your local environment. The standard front-wheel-drive Taos gets an eight-speed automatic transmission, a more economical choice for a commuter. For those who see snow or other slippery conditions for a good chunk of the year, there's the all-wheel-drive version, which also offers an optional upgrade to a seven-speed dual-clutch transmission.

While we were able to take the Taos for a quick spin, Volkswagen kept the interior under wraps and did not disclose details on tech and driver assistance aids. Based on what we could spy through the camouflage, though, the interior looks similar to the current Tiguan's and features a slightly updated steering wheel that looks sporty and cool. What we do know is that the Taos will be 11 inches shorter in overall length than the Tiguan, but that doesn't appear to affect rear passenger legroom, as we also had a chance to sample the backseat.

For less than an hour, I had the opportunity to drive the Volkswagen Taos prototype outside of the VW facilities in Oxnard, testing the compact SUV on mostly rural and suburban roads. On the roughest of surfaces, including over railroad tracks, the Taos feels well-mannered. One caveat: The wheels on the prototype were not the ones that will be on the production vehicle, so it's possible the prototype's ride quality may not be completely representative of the eventual retail model.

At sudden stops, the brakes were reassuring, and during lane changes to pass slower-moving vehicles on the freeway, the Taos reflected agility and guts. Wind, road, and engine noises were almost invisible, and throttle response was reasonably on point, the Taos responding to my throttle inputs smoothly and relatively quickly.

The Volkswagen Taos prototype I drove briefly is close to the eventual production model's targeted configuration, according to Volkswagen. Pricing and fuel economy are yet to be released, but we estimate that the Volkswagen Taos will start somewhere in the ballpark of $22,995. VW's latest compact SUV will compete against the likes of the Hyundai Tucson, Nissan Rogue Sport, and Jeep Compass.

Intrigued? We should learn the official price of the 2022 Taos at the unveiling set to take place in mid-October, though VW may hold back pricing until closer to the Taos's summer 2021 sales launch. Until then, we can sit back and relax—something the makers of the Taos's rivals are unlikely to be doing any time soon.