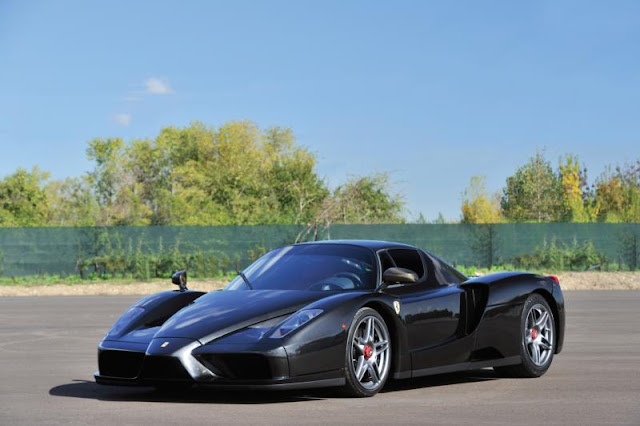 All things Ferrari Enzo on Automobile.

Depending on who you ask, the mighty Ferrari Enzo was Ferrari's first real hypercar—fitting, for a car that carries the weight of its founder's given name. As part of the exclusive pantheon of five halo Ferraris that include the 288 GTO, F40, F50, and later LaFerrari, the Enzo was the highly successful follow-up to the rather unsuccessful F50. For the F50, this success is not measured in monetary values—considering the 349-unit run of the F50 sold out as intended—but the F50 failed to capture the collective imagination with the same voracity as the preceding F40 did, especially under the looming shadow of the contemporary McLaren F1.

Launched in 2002 for the 2003 model year, the Enzo had no such hurdles. The clean-sheet, pointy Formula 1-inspired design was an instant success, as was the naturally aspirated 6.0-liter V-12 mounted amidships. Compared to the relatively simplistic F40 and F50, the Enzo is also considered the first "modern" halo Ferrari, incorporating carbon fiber construction in earnest compared to the green, thick-woven application of prior cars that was prone to degradation. Tech like traction control, active aero, and carbon ceramic brakes were bleeding edge, race-derived stuff in the early 2000s. Also contemporaneously impressive was the single-clutch automated manual six-speed "F1" transmission, capable of cracking off shifts in 150 milliseconds—shockingly quick for the time, though modern dual-clutch units have already dropped cog-swap intervals into the 20 ms range, and even modern automatics can shuffle shifts in the 100 ms range. 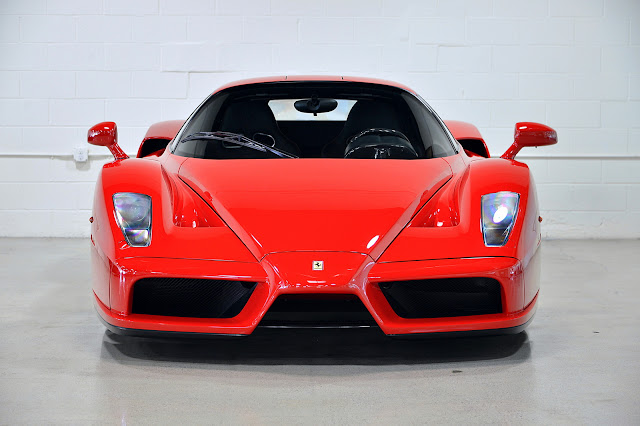 As stunning as that sharp body was, the 6.0-liter naturally aspirated V-12 was the stunning party piece. A monstrous 651 hp and 485 lb-ft of torque spun through the six-speed manumatic transmission to the rear wheels, propelling the 3,260-lb wedge to 60 mph in a reported 3.3 seconds, and on to a top speed of 218 mph. Those are still fantastic numbers today, considering most rear-wheel drive supercars just barely surpass that acceleration figure, and usually don't make it past the 210-mph mark.

Just like the later LaFerrari landed alongside the McLaren P1 and Porsche 918, the Enzo arrived flanked by a cadre of direct competitors, both eerily hailing from the same brands. The Porsche Carrera GT and the Mercedes-McLaren SLR challenged the Enzo within a year of its launch, and nearly 20 years later, the mythos of the Enzo is only stronger for that legendary competition.

For enthusiasts of a certain age, the Ferrari Enzo is it. With love-it-or-hate-it looks, an epic V-12 soundtrack, and genre-defining tech, the Enzo made a lasting impact on the modern Ferrari-loving community matched only by the F40. Two decades on, Enzos are still cherished and sought-after pieces of garage candy, due in part to the blend of old-world natural aspiration and limited driver assists along with bleeding-edge tech like carbon ceramic brakes.

Even with the somewhat clunky gearbox, the Enzo is a stupendously thrilling car. The sound and the speed are enough to justify the buy-in, and the fact that the Enzo is very likely the final naturally aspirated, non-hybrid, mid-engine V-12 hypercar that will ever be built is reason enough to stick around. 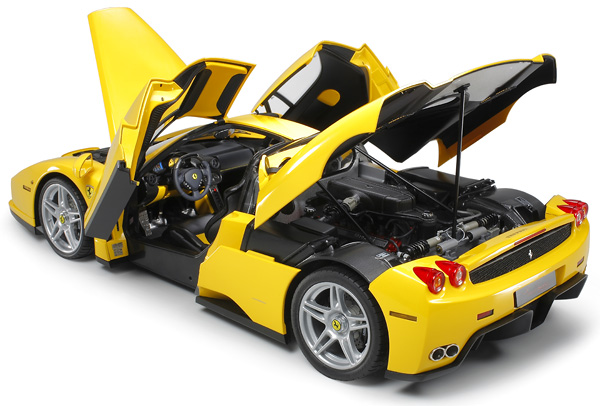 Early 2000s supercars are still struggling to find their footing, both in the market and the greater enthusiast space. Some see these aged athletes as nothing more than the poor man's foray into supercars, the rides chosen by those ballin' on a budget. Few cars produced between 2000 and 2008 have appreciated much beyond the initial purchase price, but the Enzo is one of the exceptions. If you were one of the lucky 400 to stomach the $659,000 original buy-in and managed to keep your Enzo through the market's ups and downs, a well-optioned, well-kept Enzo will fetch between $2 million and $2.8 million. Even if you adjust for inflation, you're up roughly $1 million.

Of all the halo Ferraris, the Enzo falls squarely in the middle in terms of rarity—Ferrari built 272 288 GTOs, 1,341 F40s, 349 F50s, 400 Enzos, and 499 LaFerraris—but that doesn't mean it will be anything but costly to maintain. The Enzo being an extremely low-production car means much of the regular maintenance will nickel-and-dime-(times-several-thousand) you to death with $1,600 oil changes and semi-frequent clutch pack swaps, while major engine-out services and busted bespoke componentry will easily push your bill into the five-figure (if not six-figure) range.

Our advice? Buy a medium-miles example fresh off a recent service. Most (but not all) Enzos available from major auction houses are clean examples, and if you buy the right car, you can't go wrong. However, don't expect this to triple in value—prices for Enzos have remained stable for the past few years.

Ferrari Enzos are modern darlings of the auction house, thanks to wide appeal, low production, and an approachable driving experience. Don't expect it to come cheap.

A low-mileage Enzo from the Lingenfelter Collection took home $2.8 million earlier this year

This mid-miles black-on-black 2003 Enzo changed hands for around $2.4 million

Just for fun, the last Enzo to leave the production line was gifted to the Pope back in 2005. In 2015, it raked in a whopping $6 million at RM Sotheby's impressive Pinnacle Portfolio sub-sale in Monterey. 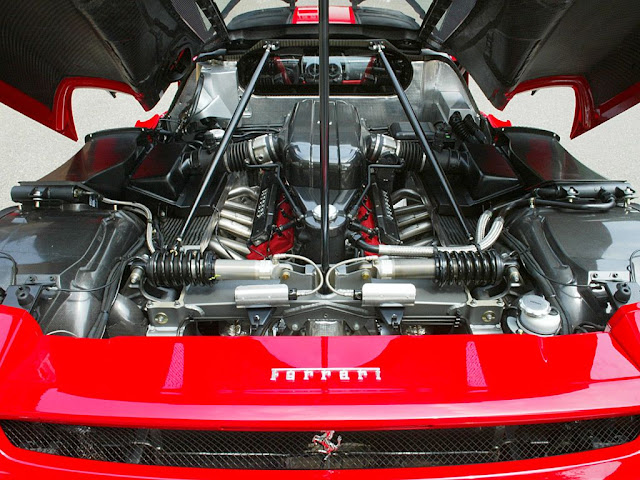 We've had precious few first-hand interactions with Ferrari's first hypercar, but we'll do our best to change that in the near future. Here are a few links to tide you over.

Semi-analogue driving experience with one foot in each era

Prices have remained stable, but expensive

You have questions about the Ferrari Enzo. Automobile has answers. Here are the answers to some of the most frequently asked Ferrari Enzo queries

How Much Does A Ferrari Enzo Cost?

Depending on color, mileage, and provenance, you can expect to pay between $2 million and $2.8 million for the privilege, though as always, there are outliers. If you had a time machine, the original MSRP was right around a cool $659,000. 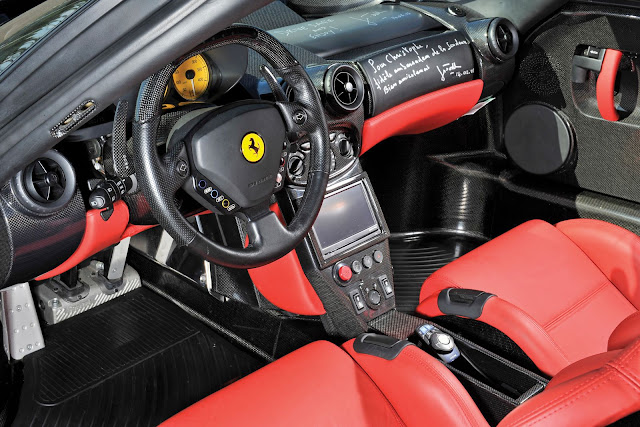 How Many Ferrari Enzos Are Left In The World?

Less than the original 400, that's for sure. A handful of highly publicized crashes and fires have diminished the stock, but we reckon there's still more than 375 Enzos sleeping in garages around the world.

Who Owns A Ferrari Enzo?

Interesting question. Well, it's safe to say the Ferrari Enzo owners club is a well-moneyed group, but regarding celebrity ownership, we know at one point or another, world champion boxer Floyd Mayweather Jr., Jamiroquai frontman Jay Kay, and actor Nicholas Cage all owned Enzos of their own. แทงบาคาร่าออนไลน์