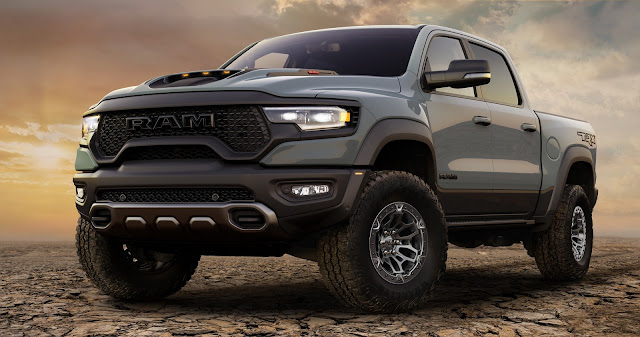 T-Rex versus Raptor is a good story, but Ram chose the name quickly because it already owned it.

You might have heard or read on enthusiast forums--or just put it together yourself--that the Ram TRX name is obviously a direct shot across the bow of Ford's Raptor, the reigning king of the Baja-style production pickup world. The idea makes sense, with TRX signifying a Tyrannosaurus rex dinosaur, a lizard certainly large and powerful enough to devour a mere raptor.

You're forgiven, then, for thinking that's the reason Ram chose the name; the Ram team has leaned into it, after all. But despite the popular conception, the real story of the Ram 1500 TRX's name is, ultimately, one of necessity. But don't take our word for it—take it from a guy who was there when the name was chosen.

"The real reason [we went with TRX], it's a funny story, actually," Gillam said. "So, this speaks to the creativity and the passion of our customers …

"We knew we wanted to do a cool truck that was an off-road trophy-truck-inspired type of thing. But we didn't really have it fleshed out visually yet, and no one had given us the official assignment to do it. So, when we got it, it wasn't just 'go do this'—it was 'go do this in 77 days.'

"And so, from the time we got the assignment, it didn't have any sketches. We had to sketch it, we had to build all the components in beta. We had to do quick and dirty clay models. We were running with our hair on fire, so we didn't really have time to think, or should I say overthink, that truck, as far as noodling and nitpicking certain things. We just had this essence of what it should be in our minds, and we ran with it.

"So, part of that was the naming of the truck. Because of the short timeline, we actually had a sheet of craft paper up in the studio, and we had probably 200-plus different naming ideas. A lot of them were really cool, out there and exciting. And at the end of the day, legal couldn't vet any of those names fast enough for the reveal. So, it was really just a timing thing.

"And they looked and they said, 'What do we already have the rights to?' And we actually had TRX, it ran for I think just one year, it was an off-road package we offered on Ram. And it was sort of a little bit obscure. Every now and again, I'll see one driving around. But it was kind of a cool name. They thought, 'yeah, you know what, it's simple, it's memorable. We own it already,' which was the big thing. So, 'let's just go with that.' It was, again, one of these things where we didn't overthink it too much.

"And when we came out with the TRX, our customers, actually, everybody on the [internet] boards was like, 'Oh, man, a TRX. Well, that's an obvious reference to a T-Rex, which can eat a raptor.' And so the name and the connection kind of stuck. And I'd love to claim we came up with that, that we were that clever, but honestly we were going so fast that we probably didn't quite make the connection. It was a naming kind of necessity, but it works really well."

Editor's note: Don't miss the full interview with Mike Gillam, where we talk about the TRX's path from concept to production, design Easter eggs, and more. ราคาบอล