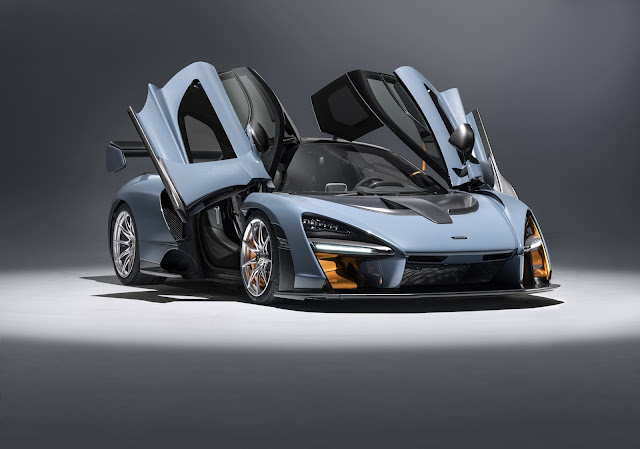 Meet the Automobile McLaren Senna, spec’d by us, delivered to us, driven by us.

WOKING, U.K.—The entrance to the suite where customers determine their choices for color and trim, and make special requests, for an Ultimate Series McLaren, involves—no surprise, if you know McLaren—a swish of a hand over a hidden sensor. It triggers a gray curved wall to glide quietly outward, revealing the path down to the room in which all your supercar dreams can come true. "Normal" customers, the sort who buy a 600LT or even a 720S Spider, don't get to see this suite. It's for the super-privileged few, the types who come here to order a 2019 McLaren Senna, a Speedtail, or an Elva. So, what the hell are we doing being ushered into this rarefied space by two Bespoke Liaison Managers (yes, really) and offered tea, coffee, and chocolate cookies with powdered-sugar McLaren swooshes precisely applied?

Ordering A 2019 McLaren Senna: How Did This Happen?

The answer is as simple as it is unbelievable. Today Automobile is ordering its own 2019 McLaren Senna. Well, almost.

McLaren North America has procured from the home base a Senna that will perform press-fleet duties, presumably smash lap records (which we have now already accomplished), and be immortalized in the pages of magazines, in videos, and in stories across the internet. McLaren, in its great wisdom, asked us to finalize the car's specification. It's quite some pressure; McLaren will produce only 500 Sennas, and "ours" will become one of the most photographed examples in the world. As Automobile's European editor and most conveniently geographically situated correspondent, the task of heading to the McLaren Technology Centre in Woking, England, falls to me. "Don't f*** it up," is the extent of the official advice from editor-in-chief Mac Morrison.

Instead of buckling under the weight of expectation, I've decided to embrace the process by the time I pull up to the gatehouse at the MTC. Around a third of all Sennas have been sold to U.S.-based customers, and the vast majority of owners took a trip to the U.K. in order to be liaised in a bespoke way. Imagine how exciting that must be! Just seeing the pristine MTC rising out of the still semi-circular lake set amongst lush green English countryside is special enough. It's a wondrous Norman Foster-designed mix of cool precision, perfect white curves, glass walls and Bond-villain chic, and it makes every other car factory on earth seem painfully ordinary. Knowing you're heading inside to spec your own version of the 2019 Senna, the company's most track-focused car—ever—is truly extraordinary. I have a feeling today (June 28, 2019) will be a very good day.

Two glass doors part swiftly as I approach the main building, and I'm greeted on the "boulevard" by Emily Barry and Graham Chambers, the aforementioned Liaison Managers. Think of the boulevard as a kind of Hall of Fame, set in front of McLaren's Racing, Automotive, and Applied divisions. Its black tile floor runs seamlessly into the lake outside, separated only by the curved glass walls, to create the impression this whole structure is serenely floating. Let your eyes follow the meandering boulevard, and you'll notice silver cylindrical lift towers, glass walkways overhead, and a whole lot of history. Formula 1 cars, Le Mans racers, McLarens old and new.

The cars presented in this sci-fi setting are regularly rotated from the display, and today they could hardly be more evocative. Tucked away to the left is XP5, the prototype F1—the famous road car, not race car—that became the world's fastest automobile on March 31, 1998. Just ahead, Chambers and Barry are flanked by Bruce McLaren's beautiful orange M7C from 1969, with aerofoils towering way up in the air both front and rear and eight mesh-covered intake trumpets sprouting from the exposed Cosworth DFV, and Carlos Sainz Jr. 's 2019 F1 car, the similarly hued MCL34. It looks huge and ugly compared to Bruce's svelte M7C and the various other F1 cars snaking out of sight, but it's a nice reminder: McLaren is coming back to prominence inch by agonizing inch in the top tier of motorsport. A few moments later, Barry waves her hand over that hidden sensor, the wall swings open, and I'm led into the Ultimate Series suite. Must. Not. Choose. Orange.

The cynic inside me doesn't want to go all jelly-legged and dewy-eyed. I am a grownup and I drive lots of cars, and I know that part of today is about making sure I spend lots and lots of money on MSO options. (Although "not too much," says McLaren North America's PR representative, Laura Conrad, through a perfect, unfazed smile. But bloody hell, it's hard to stay level-headed in here. Steps lead down into a circular room with a rather formal-looking glass table and chairs, but to one side is a more relaxed leather sofa. Set amongst the furniture are sample drawers with paint finishes and tinted carbon fibers, while various leathers and materials are draped over neat racks, and there are reels of beautiful threads for interior stitching. Senna production is coming to an end and the room is ready for Speedtail clients, so there are bespoke luggage options, too.

It's all slightly overwhelming, and when a highly charged Ayrton Senna video plays on a white wall, which then rotates to reveal a real-life McLaren Senna resting on a turntable, all my resolve is gone. I'll have everything, please. In all of the colors. Especially orange. Shit, maybe Morrison knew what was going to happen once I actually set foot in here.

Luckily, Barry and Chambers have navigated plenty of people through this process, and they begin to expertly lead me toward themes and possibilities on a large video screen set opposite the turntable. Colors and wheels can be loaded onto renderings of the Senna on a racetrack, and you can flip, rotate, zoom, and basically play until your heart's content. It's a powerful tool for visualizing the perfect spec. Maybe too powerful. After an hour or so, I'm still getting nowhere. Fast.

Honestly, I went into this with a few clear avenues I wanted to explore. Instagram research had shown me the Senna looks its best in a pretty restricted palette. Dark green looks terrific and, conversely, so does white. I'd also seen a car that featured its lower half in black and the upper surfaces in orange, which really emphasizes the spaceship vibe. I didn't want to copy anyone else, but I liked the idea of playing and experimenting from these starting points.

Barry and Chambers patiently upload various options based upon these basic parameters, and I have two additional, able assistants. Photographer Dean Smith is a man of terribly poor taste (look only to his range of orange and green jeans for evidence), but he does know what works best on camera—a vital characteristic for a press car. And Conrad plays her PR role perfectly. Not once does she veto any wild combinations, but the silent grimace on occasion suggests certain cars would probably not meet the "resale requirements," and never make it beyond the garish renders. We're all pretty well aligned, anyway, but nothing has quite hit the spot.

Of course, I'm desperate to avoid the cliché Gulf colors. "Talk about a lack of imagination," I chuckle to myself. Until, that is, I take a little break from the suite for an inspiring wander along the boulevard. It reveals "25R," the recently restored F1 GTR Longtail race car, in all its Gulf-liveried glory. It looks sooooooo good, and I immediately spiral back toward baby blue with orange or red pinstripes picked out for the front splitter, rear diffuser, and the sharp rear-fender tops.

On the big screen, though, it just doesn't look right. Too obvious. A little cheap, maybe. "What about purple?" I ask to nobody in particular, almost in desperation. Barry immediately taps into every warm, fuzzy feeling I've ever had about McLaren Automotive.

"Well, we could offer Amethyst Black," she says. "The same color as P1 OOV."

If you don't know, P1 OOV is the sinister-looking original press car for the first ever Ultimate Series model. You've probably seen that amazing P1 belching flames and billowing tire smoke. Me? I spent many, many happy hours in P1 OOV. I almost shout, "Oh my god, I love that color!" Our 2019 McLaren Senna will be Amethyst Black. With Speedline Gold wheels and highlights. I look around the room. Smith says it'll photograph just fine in California sunshine, Conrad is smiling a very happy PR smile. I think we nailed it.

We spend the next hour or so working on the details, and the room is buzzing with excitement and a sense of achievement. Spec'ing your own hypercar is a very personal thing, but this feels like a group effort, a satisfying collaboration. Barry and Chambers feign excitement, too. Is this rehearsed or genuine? Who knows? I don't care. Automobile's 2019 McLaren Senna is going to be amazing. Here's how it breaks down:

Gloss Speedline Gold pinstripe around headlights as per render: $2,927

Does it feel good to spend somebody else's $1.1 million? I'm going to say yes. Even better when, almost a year later, you get a call that goes like this: "The Senna is ready. Would you like to take delivery at the Thermal Club?" I happen to be in California, and the Thermal Club, a private racetrack for the disgustingly wealthy near Palm Springs, is but a couple of hours away.

The big reveal is held at O'Gara Motorsport's facility at Thermal. O'Gara is part of a group that owns the McLaren Beverley Hills and San Diego dealerships, and this is a ritual several lucky owners have been through already.

Just like the process back in Woking, it feels extremely special. The Automobile Senna, chassis no. SBM15ACA3KW900804, rests beneath a black silk sheet when I arrive, the car flanked by two rows of customers' toys. Not exclusively McLaren but all very much made of The Right Stuff. There's a Porsche 911 GT2 RS, a Mercedes-AMG GTR GT3 car, several McLaren GT4 race cars, and a couple of Senna GTRs for good measure.

They all disappear when the silk is pulled back. The Senna—our built-to-order 2019 McLaren Senna—looks absolutely stunning. I know the track special will never be considered conventionally beautiful, but I'm not sure it will ever look better than this. The Amethyst Black paint changes as you circle the car, bright light revealing the purple within, then receding to leave a deep, rich inky black. Set against the Speedline Gold wheels and pinstripes, it packs incredible drama and exudes just the right amount of evil. I'm so glad we didn't settle on a pastiche of a motorsports livery. In fact, I couldn't be happier.

"Want to run a couple of laps?" asks O'Gara's Parris Mullins. Now I definitely couldn't be happier. I'll just break it in gently before Automobile's pro racer, Andy Pilgrim, tries to smash the production-car lap record at NCM Motorsports Park in Kentucky. Even when watching the video of his successful run a few weeks later, I still want to shout at him: "Hey, Andy, careful with our baby!" แทงบอลขั้นต่ำ