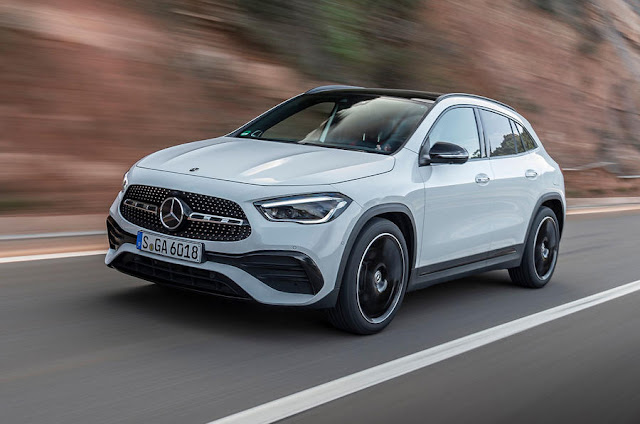 Small in stature but big in luxury.

Deep down, the 2021 Mercedes-Benz GLA doesn't really want to be a car. Sure, it is one, and quite a good one despite being a crossover, but the only reason the GLA has an engine, four wheels, and a steering wheel is because Mercedes-Benz doesn't sell personal subway cars. Based on our test drive, if the GLA had its way, though, it would do away with the driving altogether to let you focus on what's going on inside the cabin.

And why wouldn't it? It is, after all, a very nice, if somewhat compact, lounge space—the GLA's true purpose. Think of the all-new 2021 Mercedes-Benz GLA not as a car, but as a luxurious waiting room, fully decked out with entertainment and comfort options. The sad truth of it is this is what most cars are used for these days, most of the time. The chore of wending our way through any medium or large city has become so tedious that most of the car-buying world hopes their next car will drive itself.

$1,500: Panoramic sunroof, which is huge, but doesn't let in too much light even when it's extremely bright out.

$850: Burmester Sound System, which, as usual with Mercedes-Benz and Burmester, sounds fantastic

$700: 19-inch wheels, which seem like a fitting upgrade, visually, but probably contribute to some road harshness entering the cabin.

As you can see, most of the big-ticket items are about giving the driver some assistance in maintaining their attention or correcting any lapses, while also trying to keep all the other occupants peacefully distracted. It's an effective combination, especially if you have to brave the streets of a major metro area, replete as they are with drivers whose inattention is matched only by their ineptitude.

In this sort of environment, the 2021 GLA 250 shines when tested. Yes, it's a $50,000-plus luxury vehicle, but stuck in traffic, letting the car handle most of the actual driving (but always keeping an eye out; none of these systems are perfect), listening to the Burmester sound system, sitting in a comfy but supportive leather chair … it's hard to call this "entry level" luxury, even if that's the label people tend to slap on vehicles this size. This really is a great example of, and a great argument for, Mercedes-Benz's "same sausage, different lengths" vehicle range. Is this smallish casing really stuffed with the same meat as luxury leviathans like the GLS and G-wagen? Not in all of the physical ingredients, no, but, at least when well configured, it cooks up the same.

It's the "well configured" in that last bit that carries a lot of the responsibility for the GLA's thoroughly premium feel. Sure, the interior is great, even when the price is taken into account, with the latest iteration of Mercedes design themes evident on the steering wheel, door control areas, and the familiar dashboard embedded with a pair of massive, high-res displays. But as nice as it is, the GLS and G-wagen are available with nicer materials and even higher build quality, as you'd expect given the price. What doesn't change between the vehicles, however, is the technology—sure, there may be more exotic tech available higher up the model range, but in terms of driver assistance, especially, the GLA 250 is close to the cutting edge for the industry, regardless of price. That's special, and it feels special, which is something you don't often find in a smallish crossover.

You may have noticed my use of the word "smallish" rather than simply calling the 2021 Mercedes-Benz GLA 250 "small." That's because, although it's the smallest of Mercedes-Benz's utility vehicles, it's not all that small. Compare the new GLA's dimensions to those of the two-sizes-up GLC (skipping right over the somewhat off-roadier and larger still GLB) and you'll see what I mean—the GLA has just a bit more legroom front and rear, and nearly as much shoulder room. As for cargo space, the GLA gives up just 4.0 cubic feet to the GLC behind the rear seats, and another 2.0 cubic feet with the seats folded flat. That's despite the 2021 GLA being 5.7 inches shorter in wheelbase, 10.2 inches shorter overall, and 2.6 inches narrower than the GLC. It's just a more efficient use of space.

With its lounge-forward personality, the new GLA presents, as I mentioned earlier, as something that would rather not be a car if it didn't have to. That's true as far as its hopes and dreams, but being a grown-up SUV, the GLA knows life isn't only about aspirations—there's work to be done. In that sense, the GLA is an excellent vehicle, demonstrating during my test the expertise Mercedes has developed in its more than 100 years of building automobiles.

In fact, it's precisely because it's a very good car that its car-ness can slide into the background. Yes, there's a punchy, turbocharged 2.0-liter four-cylinder masticating the atmosphere as it makes its 221 horsepower and 258 lb-ft of torque. But it barely makes its presence known until you've gone full-throttle—a relatively rare occurrence even for an impatient lead-foot like myself, thanks to the wide, flat, relatively low (1,800-4,000 rpm) torque plateau. It's noticeable that the engineers put some thought into keeping the engine behind the scenes as it plays its central role.

The eight-speed dual-clutch transmission is a bit less well-tuned for escaping notice, however. Once you're moving at more than 10 or 15 mph, it's a fine gearbox, executing shifts quickly and seamlessly. But from a stop, the dual-clutch exhibited some of the jerkiness and gear-hunting uncertainty we've noticed in other similar transmissions. It was far from a dealbreaker-level condition, and really only something you'd notice if you were looking for it, but that's what we get paid to do here.

In practice, most of the experience of test driving the 2021 Mercedes-Benz GLA 250 around a modern metropolis involves interacting with the driver-assist systems. Thankfully, Mercedes' elegantly simple system continues to function with almost total transparency, requiring no more button presses or visual confirmations than setting the cruise control in a pre-computer-era car once configured  the way you like it. Simply engage the cruise and let the car steer to stay in the lane (when it can tell where it is), and keep a safe distance from the car ahead.

The GLA's lane-keeping is impressive, even on the broken, ill-painted surface of the 405 freeway. It managed to avoid any untoward late-braking maneuvers even when other drivers respected my following-distance less than they should have, and it tracked securely near the center of the lane at almost all times, only losing the path of the often faded or missing lane markers on two occasions. Given that I only had the GLA for a few days, that's a high enough error rate to mandate keeping your eyes on the road and remaining aware of your surroundings even when it's active, but it does take a lot of the stress and tedium out of grinding through bumper-to-bumper traffic.

The only thing the 405 threw at the GLA that it didn't handle with ease was the rough, broken texture of the concrete surface itself—the large 19-inch-diameter wheels and relatively low-profile tires transmit a noticeable amount of noise into the cabin (on those rare occasions you can exceed 50 mph), and don't help the already-on-the-softer-side suspension cope with the situation, either.

2021 Mercedes-Benz GLA 250 4Matic Versus The Competition

The 2021 Mercedes GLA 250 makes a strong case for itself on the spec sheet, offering more legroom than not only the GLC, but also beating the front- and rear-seat legroom in the (also excellent) BMW X1, the X3, and the Audi Q3, while being right on par with those next-size-up models in headroom and shoulder/hip room. At a stout 6 feet, 2 inches, I was comfortable in every seat in the new GLA.

Compared to the X1 and the Q3, the GLA is down just 7 horsepower, and matches both on torque, so it doesn't come up short there. At more than 200 pounds lighter than the BMW X1 xDrive28i, the GLA is about as heavy as a typical midsize sedan. It also helps the GLA run the 0-60-mph dash in just 6.4 seconds when equipped with 4Matic all-wheel drive (just a tenth slower than the X1), or 6.6 seconds in front-drive form, a dead heat with Bavaria's best. Don't get in any top-speed races with the BMW, though; the Mercedes is electronically limited to 130 mph, while the X1 can run 131 mph by default, or up to 143 mph with an optional package.

What about price? The GLA stacks up competitively on that front, too: Its $39,325 base price when equipped with 4Matic all-wheel drive is $2,670 less expensive than the current BMW X1 with xDrive all-wheel drive. The Audi Q3 starts at just $35,695, making it the relative bargain of the group, but it also has less legroom in the second row and fewer available driver-assistance features. If you can do without the 4Matic system, a front-drive GLA 250 can be had for as little as $37,280.

All in all, the new 2021 Mercedes-Benz GLA 250 punches well above its (rather svelte) weight, and competes with the luxury crossovers in the next class up, while being price-competitive, good-looking, comfortable, and with the possibility of plenty of tech. The 2021 GLA 250 might not want to be a car, but it's very good at it. บาคาร่า pantip