2021 Kia Sonet: Not a Usable Word in Scrabble, Definitely a New Tiny SUV 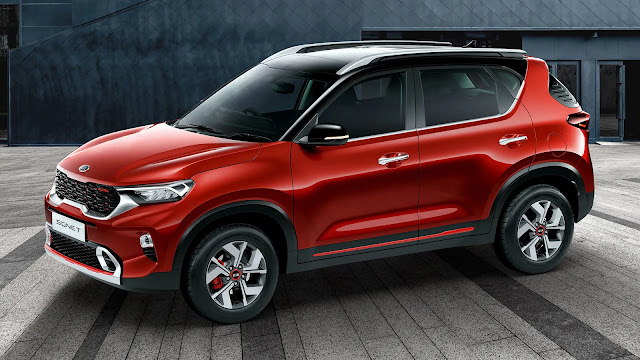 A Kia what now? Meet the Sonet, a new tiny crossover being introduced for India that Kia says will soon be available in other global markets. It isn't entirely clear if the U.S. is among those markets, but it seems unlikely given Kia's well-fleshed-out small-SUV lineup here. The Sonet is more or less the same size as Hyundai's Venue—which is sold in America—meaning it'd overlap heavily with the Kia Soul and, to some extent, the recently introduced Seltos that sneaks in between the subcompact Soul and the compact Sportage.

What Is The Kia Sonet?

The Sonet is a sub-subcompact SUV that looks sort of like a squished mashup of a Sportage and a Seltos, with dinky little wheels and a bubbly roof. It's cute in the way most small things are cute, and interesting details abound, from the body-color strip behind the rear doors that wraps over the black roof to the deeply sculpted body sides. Lesser trim levels get body-color roofs, but cut lines define the same roll-hoop-style element highlighted on the GT-spec Sonets.

That applies doubly to the interior, which has cool vertically oriented air vents, a large available 10.3-inch central display, and big digital readouts for speed and climate controls. The gauge cluster, in particular, has a nifty binnacle design with a 4.2-inch screen on one side that can display navigation instructions, plus wraparound readouts for fuel level, engine temperature, and the tachometer.

A Gaggle Of Transmissions

For something so small, the Sonet sure offers a bevy of powertrain options. There are two gas engines—a 1.2-liter four and a 1.0-liter turbo—and a 1.5-liter diesel. Kia went nuts with the Sonet's transmission options, furnishing five (!) of the things: A five-speed manual, a six-speed manual, a segment-exclusive (in India) six-speed automatic for the diesel engine, a seven-speed dual-clutch automatic, and the same i-MT clutch-pedal-less manual introduced in the India-market Hyundai Venue. That last transmission easily is the most interesting of the bunch, as it retains a traditional manual shifter but lacks a clutch pedal; moving the shift lever initiates an automated clutching process.

Kia doesn't specify, but it seems as though the Sonet is front-wheel-drive, like the Venue. With automotive safety a growing topic of interest in India, especially among low-cost vehicles, the Sonet boasts a rash of airbags, child-seat anchors, anti-lock brakes, and electronic stability control. And while the Kia is definitely going to be cheap, it doesn't look it, which will suit it well if and when it spreads to other markets. Will it come Stateside? If Kia sees room beneath the Soul, maybe, but that's a thin slice of the market and the company indicates it has no plans to do so at the moement. The Soul starts at $18,610, so the Sonet would have to land in the $15,000 space to make any sense, but never say never in a market that can't get enough crossover SUVs. บ้านผลบอล